The gut or intestines play an important role in protecting the body from harmful bacteria and toxins.  However, the gut has other important functions than digestion. It contains most of our immune system and produces neurotransmitters like serotonin and acetylcholine. The gut-brain axis consists of a two-way communication system between the brain and the gut system.  This connection links the emotional and cognitive centers of the brain with GI  functions. Individuals with leaky gut are more likely to suffer from autoimmune disease, anxiety, and depression because of the disruption of the gut-brain axis. They are also more likely to suffer from recurrent infections and inflammatory diseases.
Leaky gut syndrome( LGS)  is a digestive condition that affects the lining of the intestines. The diagnosis is made when abdominal bloating, gas, cramps, food sensitivities, diarrhea, and constipation occur.  Other symptoms might include nutritional deficiencies, fatigue, headaches, difficulty focusing,  skin problems, and joint pain.  Leaky gut results in increased permeability of the intestines allowing large particles of ingested foods that would normally be kept out to enter the bloodstream resulting in food sensitivities. The exact cause of leaky gut is unknown but an overgrowth of yeast and bad bacteria, lack of good bacteria( flora), decreased stomach acid or enzymes,  stress, antibiotics, lack of fiber, alcohol and processed foods may play a role.  A  past or current history of chemotherapy, radiation, recurrent infections, and diabetes and is more likely to be associated with those who suffer from the leaky gut syndrome. 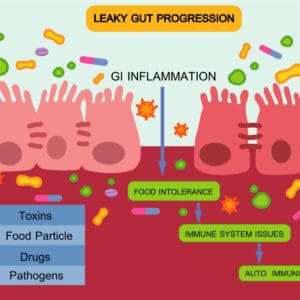 Our intestines become leaky (increased permeability) when the intestinal lining does not work properly. Normally there are GI cells that form a tight barrier that controls what we absorb into the bloodstream.  An unhealthy gut may have large cracks or openings that allow partially digested food, toxins, and bacteria to penetrate the tissues beneath it. This structural change may cause bad changes in the gut flora that could lead to inflammation and digestion problems along with imbalances in the gut microbial can trigger the body’s immune response which leads to inflammation. It is thought that this inflammation leads to increase intestinal permeability seen in leaky gut syndrome.
Patients with celiac disease, irritable bowel, and Crohn’s disease experience the loosening of the tight junction as seen in leaky gut syndrome. They also experience the loss of microvilli ( tiny hair on the intestinal cells that absorbs nutrients are seen in all these conditions. It is unclear if they are the same diseases or the progression of each other. The consequences of a leaky gut can be dire. It is thought to be linked to autoimmune disorders and many other chronic diseases. Leaky gut also appears to be associated with chronic fatigue syndrome, fibromyalgia, chronic infections,  autism, diabetes, polycystic ovary syndrome, food allergies, liver disease, asthma, acne, obesity, and mental illness.

How to Heal a Leaky Gut

There are a few things that can help those suffering from leaky gut syndrome: