PMS is a condition that affects over 80% of women in the United States but is undiagnosed by most physicians. Most physicians recognize 5% of women who suffer from severe PMS. Severe depression, irritability, and mood swings during the last two weeks of the menstrual cycle can interfere with a woman’s ability to function at home and work. The cost of this interference can mean career difficulties, loss of income, diminished parenting abilities, and troubled relationships with spouses, and other social acquaintances. The other 75% of women go undiagnosed by the medical establishment. Conventional medicine has not agreed upon a specific cause for PMS, which makes doctors skeptical about its existence. At the same time, PMS is presently so commonplace that it is considered to be a normal occurrence. The treatment of PMS is directed toward eliminating symptoms. Doctors prescribe anxiolytics and antidepressants for anxiety and depression, diuretics for water retention, Motrin for breast pain and menstrual cramps, and birth control pills for other symptoms such as bleeding. The inadequacy of treatment, the skepticism about the existence of PMS, and the lack of a feasible explanation for PMS symptoms by conventional medicine make this a subject not readily discussed by most physicians with their patients. 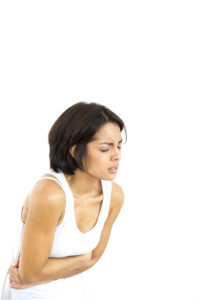 The diagnosis of PMS requires only one of the following symptoms: mild psychological discomfort, bloating and weight gain, breast tenderness, swelling of hands and feet, various aches and pains, poor concentration, sleep disturbance, and change in appetite. The symptom must occur only in the luteal phase (the two weeks prior to the beginning of the menses) of the menstrual cycle, peak shortly before menstruation and cease with the onset of menstrual flow or soon after. This was the criterion used to diagnose PMS according to the Tenth Revision of the International Classification of Diseases.

PMS is a condition that affects over 80% of women in the United States but is undiagnosed by most physicians.

The symptoms of PMS are grouped into four clusters. The first cluster of symptoms includes tension, anxiety, mood swings, and nervousness. Sixty-eight to seventy percent of women with PMS complain of these symptoms. There are several studies that show an association between progesterone deficiency and anxiety. In the body, pregnanolone and allopregnanolone are derived from progesterone. These chemicals behave like sedative drugs i.e. Xanax, Prozac, Zoloft, and barbiturates. These drugs are often prescribed for women with PMS. The majority of patients prescribed Prozac and other selective serotonin reuptake inhibitors (SSRI’s) are women between the ages of 25 to 50. These are also the same age ranges in which women commonly complain about PMS symptoms. A recent study suggests that synthetic SSRI’s are helpful in the treatment of PMS because they increase the level of allopregnanolone. In other words, these drugs are mimicking the effect of progesterone. Allopregnanolone binds to GABA receptors, in the brain. Just like any hormone, allopregnanolone must have a receptor that recognizes it in the brain. This GABA receptor also responds to barbiturates and SSRI’s, which diminish anxiety and depression.

Studies show that the mental symptoms of PMS are worse in women with markedly elevated estrogen levels during the luteal phase (two weeks prior to menstruation). Remember our discussion about the proper 20 to 1 ratio of estrogen to progesterone. These studies also showed that if the estrogen level exceeded the normal estrogen/progesterone ratio, PMS symptoms increased. Another recent study showed that if higher amounts of SHBG are available to bind estrogen, the symptoms of PMS are lessened. SHBG was increased in this study by dietary changes. Increasing SHBG decreases the amount of active estrogen, which restores the normal estrogen/progesterone ratio.

The second cluster of symptoms that are most often reported are weight gain, abdominal bloating, breast tenderness, and swelling of extremities. Sixty to sixty-five percent of women complain of these symptoms. They occur as a result of estrogen’s ability to increase aldosterone levels. As mentioned earlier, aldosterone causes fluid retention. Estrogen enhances the effect of aldosterone, while progesterone blocks its effects. If estrogen is elevated and/or progesterone is decreased, aldosterone’s influence is increased, which results in fluid retention.

The third group of symptoms includes increased appetite, cravings, headache, and fatigue. These symptoms are identified in approximately 45%-50% of women with PMS. These symptoms are also seen in patients with hypothyroidism or low thyroid hormone levels. Estrogen interferes with the action of the thyroid hormone, while progesterone enhances the thyroid hormone. Estrogen increases the production of the protein thyroid-binding globulin. This protein transports thyroid hormone in the blood. When thyroid hormone is bound to the carrier protein, it becomes inactive. If estrogen levels are elevated, thyroid-binding globulin is elevated and free thyroid hormone is decreased. A low, free thyroid level decreases the body’s ability to utilize carbohydrates, fats, and proteins. This causes cravings and an increased appetite because the body is unable to effectively use the food consumed. Thyroid hormone has profound effects on the brain. Low thyroid levels can cause depression, weakness, and fatigue.

The final group of symptoms includes depression, confusion, crying, and forgetfulness. Approximately, 36% of women with PMS complain of these symptoms. These symptoms are usually found in the most severe cases of PMS. Neurotransmitters (chemicals that transmit messages within the brain and help control mood) decrease with increasing estrogen levels. The SSRI drugs (Prozac, Paxil, etc.) that are used for depression increase neurotransmitters called monoamines. Estrogen inhibits the synthesis of monoamines. Endorphins are also a group of compounds made in the brain that normalize or elevate the mood. Estrogen excess in the luteal phase decreases endorphin levels in the brain. Studies have shown that low endorphin levels in the luteal phase are common in women with PMS. Stress decreases endorphin levels and exercise increases endorphin levels. Also, hypothyroidism can cause difficulty with concentration and forgetfulness. Free thyroid hormone directly affects the ability of the brain to utilize the energy needed to perform properly. Stress also decreases the amount of thyroid hormone available.

Premenstrual syndrome (PMS) has been characterized by several symptoms that seem to be related. In conventional medicine, if a group of symptoms seems to be related but there is some uncertainty about the relationship, they are labeled as a syndrome. Because hormones have such a wide range of effects and influence each other, it is confusing and difficult to pinpoint all of their interactions. In addition, when you have ineffective methods to measure hormone and carrier protein levels, it confuses the picture more. Only recently have resources become available that allow conventional doctors to measure free hormone levels, carrier protein levels, and receptors. Today, very few labs and physicians utilize salivary testing to measure free hormone levels. As more studies are being done utilizing more effective laboratory methods, the causes of PMS will move from speculation and theory to documented proof.

These are our Recommended Products*:

Click on the product to order, and learn more.

*These statements have not been evaluated by the Food and Drug Administration. These products are not intended to diagnose, treat, cure or prevent any disease.